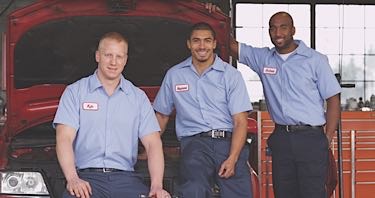 The fire marshal came into our shop one day out of the blue and told us we had a problem. The back of the shop was too wide open, he said, and if a fire started, it would quickly spread across the entire building. And just like that, they made us put up a wall right through the middle of the shop.

Almost instantly, the techs started calling each other “Eastsiders” and “Westsiders.” They were joking at first, but it quickly went from guys just fooling around to something more serious. Pretty soon, the two groups were actively hostile toward each other.

If a tech had to cross the shop to get a tool, the techs from the “other side” would give him such a hard time that it usually wound up ruining his day. And that was not even the end of it. Before anybody noticed, the techs on one side would no longer want to interact at all with the techs on the other side. They stopped helping each other push cars, solve problems or answer questions.

It’s hard to believe, but something as simple as a wall had destroyed the culture we thought we had built.

Sometimes it’s a physical wall that creates divisions in your team. But even if your bays aren’t divided into two, there’s still the wall that separates your bays from your front counter.

And sometimes it’s more metaphorical, like the division between younger techs and the older guys, or between family members and the rest of the employees.

No matter what has caused a division, the end result is the same: communication breakdowns that reach all the way to the customer.

Pulling Out of the Nosedive

We had an infection in our shop. Because the “Westsiders” would not help the “Eastsiders” and vice versa, it made everyone’s job more difficult. Both the inspection and advising processes broke down, meaning we weren’t delivering the kind of superior service that we needed to set our shop apart!

I needed to tear down that wall without violating the fire code.

So, we started playing games. To build friendships and trust among the team members, we used something I called the “Buddy Contest” (see the end of the article). The rules were pretty straightforward: help each other and be entered to win a great prize. Suddenly, the techs didn’t see the “other side” as an enemy; they saw them as a path to winning a game and getting a prize.

Just as quickly as the firewall came up, the divisions between the Eastsiders and Westsiders started to come down, and the shop got back to being a team that was in-sync.

But the point isn’t to play a game and hope for the best. Games are only a Band-Aid. No single team-building exercise can heal a shop with an infected culture. Without a larger fix, the problems will come right back and eat the shop from within.

Worse, if those divides run deep, you’ll see it in other areas of the shop. Employee conflicts rise as customer satisfaction drops. Processes break down. Turnover and attrition skyrocket.

Technicians and service advisors easily spend 40, 50 or even 60 hours per week in the shop. If the environment isn’t a welcoming, happy place for them to be, they’ll look to spend their time somewhere else that does fill that need.

Isolation in the Bays

Of course, it’s not always a new problem that creates a divide in your team. You don’t have to look any further than at the relationship between techs and advisors to understand how most divisions arise in a shop.

Technicians spend all day in the back of the shop with broken cars. They spend hour after hour busting their knuckles against broken metal, turning wrenches and fixing problems caused by other people. The job itself traps technicians in an antisocial headspace.

And, yes, being a service writer isn’t easy, either. The people up front have to deal with upset customers who yell at them. They get called liars and cheats and all kinds of horrible things about them that aren’t true, just because they are the ones at the front counter.

But they also get the love.

If everyone in the shop is doing their jobs right, the service writers see the people who come in just to thank us. They get the gratitude, the smiles and even the cookies and treats from happy customers.

The techs don’t get that love. When they’re stuck in the back, they miss the appreciation, the gratitude, the human contact and that look in the eye that makes their work feel valuable.

And while every culture breakdown may not revolve around customer feedback, they probably all do revolve around the bigger issues in this scenario: respect, gratitude and communication.

Remove those things, and a late parts delivery suddenly starts to feel like the service advisor is sabotaging you, or a comeback starts to seem like a technician isn’t doing his job.

It happened to me. It happened between the techs and the service advisors in my shop. I’ve seen it happen again and again in other shops.

The solution? We had to fix the culture.

We had to make the shop a place where respect, gratitude and communication came first. And, yes, we still play games in the shop to this day — everybody loves them! But we also had to support the new culture with policies and procedures to make that change permanent.

How Do You Fix Problems For Good?

Before you can fix a problem, you have to recognize that the problem exists.

Which is why it’s so important to measure every day so you can know exactly where your shop stands.

The cliques in our shop were there for years, but I never saw them clearly until the firewall went up.

I can not stress enough the need for shop owners to measure, every day, in order to know exactly where their shop stands. You can see the symptoms as soon as they develop, which means you can stop problems before they become exacerbated.

When you know where the problem is, you can set up the right policies and procedures to fix it.

Sometimes, you may need only a team-building exercise to turn things around. But more often, the problem is deeper. In our case, the Buddy Contest was only the beginning. Once the team was working together again, we needed to create procedures to improve communication to make the two “sides” work together as effortlessly as possible.

As shop owners, you set the pace for the entire team. You can settle for the status quo. Or you can encourage communication, respect and fun in the bays and at the front counter.

Culture isn’t something you can change overnight. It takes initiative, commitment and participation from everyone on the team.

You control whether the shop is going to be profitable, grow or shrink. You have to take the initiative. Get the numbers, get the right policies and procedures, and get everyone involved.

Almost every shop I have visited or worked with is plagued by cliques, seniority issues and other “high-school popularity” problems, to one degree or another.

When teams divide up and refuse to work with each other, the result is never good! The service writers, managers and even the customers are getting a bad deal!

The “Buddy Contest” is my way of getting teams to work together without me having to micromanage.

Here’s how it works…

Gather your entire group of technicians together. Announce that you have a new contest starting today and that everyone is eligible to win except the managers and shop foreman/lead tech.

In 30 days, everyone is going to meet again and be asked to write a name on a piece of paper. They will write down the name of the person who helped them the most over the last month. All of those names will be dropped into a hat. Because managers are supposed to help, they cannot win.

As each tech goes through their day, they should remember that someone is going to ask for their help with something: It may be with pushing a car out of a bay, a technical issue or it may just be to listen as they need to talk. It doesn’t matter why, the only thing that matters is what they do next!

The person whose name comes out of that hat the most times is going to receive a prize. The prize could be cash, a gift certificate for tools or another prize that you see fit.

Over the course of the month, you’ll see an end to the superiority issues. Better techs will stop clamming up around others. When they feel they have a chance to “get something” for giving something, they usually open right up and drop any issues that they previously had.

My guys love this game, especially because they feel it provides them a way to give each other positive feedback in a safe and anonymous way. The “Buddy Contest” is fantastic for building friendships and trust among your team members. Try it!

Click HERE to continue reading this article about team building in its entirety at Shop Owner Magazine.